The PHP4.8 billion Panguil Bay Bridge (PBB) project will begin construction next month, and is expected to be completed by October 2021.

Vinah Jeanne Maghinay, Department of Public Works and Highways in Region 10 (DPWH-10) spokesperson, said Tuesday the 3.7-kilometer PBB will shorten the travel time between the provinces of Lanao del Norte and Misamis Occidental to seven minutes.

Currently, the route takes an hour and a half through ocean-going vessels via Tubod and Tangub towns. 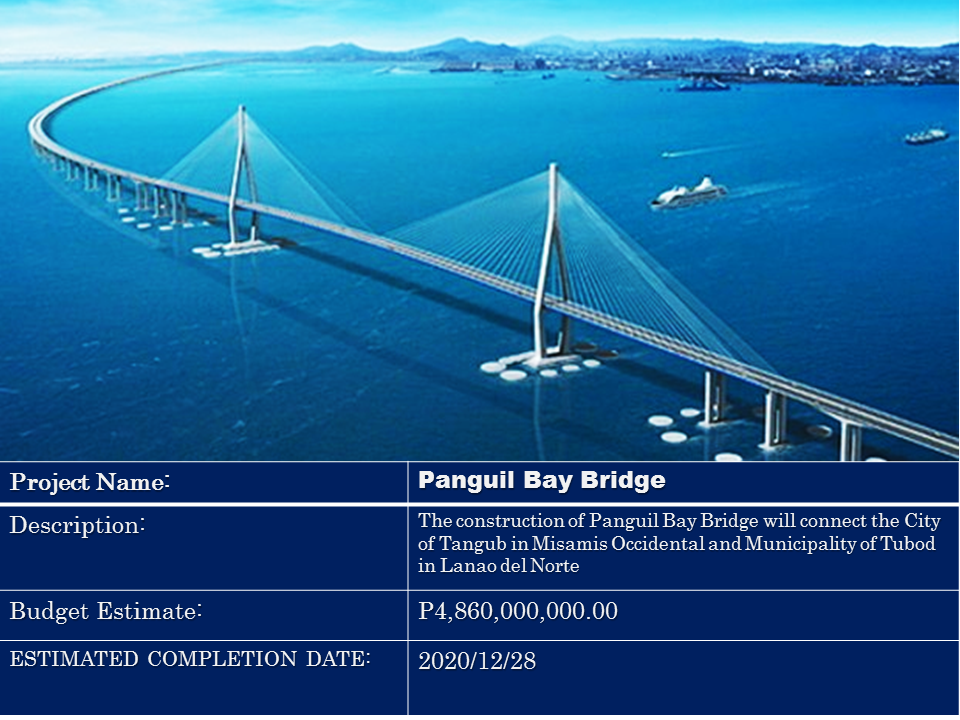 Maghinay said DPWH has already certified the acquisition of road right-of-way for the construction of the bridge’s approaches and access roads and that the bidding process has been completed late last month. Contract signing, she said, will be done on October13-16 and notice to proceed with construction will be on the 28th.

PBB’s original cost was pegged at PHP4.858 billion, but eventually ballooned to PHP7.352 billion as a result of peso-dollar exchange rate movement, which rose from USD1=PHP42.71 to USD1=PHP52.00 over a span of four years.

The Korean Economic Development Cooperation Fund will finance the project.

Aside from the PBB, the Regional Development Council in Region 10 (RDC-10) also identified the Mindanao Railway System and the upgrading of airports in Ozamiz, Surigao, and Laguindingan in Misamis Oriental, as priority infrastructure projects.

Two other corridors were also created in the southern and western parts of Mindanao to address the challenges of growth and development in the island, forming the Mindanao Development Corridors (MDC).

He said the NMDC has potentials of developing the region into a world-class industrial and service center, “owing to its public infrastructure that is suited for industrialization.”

“The presence of eco-zones and the location of industrial and agribusiness enterprises in the region, coupled with a strong agricultural sector and a budding business process outsourcing industry makes NMDC a key player in Mindanao’s socioeconomic development,” Dimaporo said.

MinDA, through the Mindanao Peace and Development Framework Plan or the Mindanao 2020, has adopted the MDC as a key spatial strategy aimed to improve infrastructure, establish connectivity, and spur the development of growth clusters within the island-region, allowing it to achieve balanced and inclusive growth among its regions.

Jim Paredes umamin na ang video ay Totoo “I was irresponsible. And I am truly sorry”